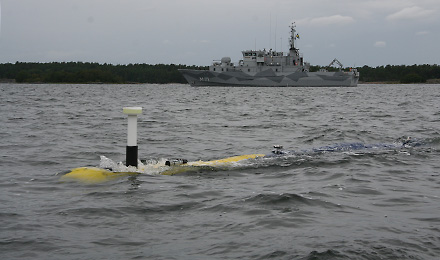 Saab's AUV62 "Sapphires" is a modular autonomous underwater vehicle which can perform a variety of missions.  The AUV62-MR (Mine Reconaissance) version features a dual flank-array sonar and high-resolution gap-filler sonar for long endurance mine hunting missions.  In the AUV62-AT anti-submarine target variant, an omnidirectional hydrophone replaces the forward-looking sonar (FLS) in the base module, and adds a transducer section and a towed transducer tail to generate realistic submarine noise and sonar echoes.

The AUV62 serves with the Swedish Navy in both MCM and rapid environmental assessment roles.

30 May 2013 - Defence and security company Saab has signed a contract on delivery of Autonomous Underwater Vehicle systems, AUV62, in training configuration. The order has a total value of MSEK 148 ($22.5 million USD) and system deliveries will take place during 2014.

The order comprises the supply of AUV62, the latest version of the Autonomous Underwater Vehicle in a configuration as training target for Anti Submarine Warfare (ASW) training.

“The AUV62 is a competent and advanced system that will enhance and strengthen the customer’s underwater capabilities. We are of course very satisfied to have been able to secure yet another order for the system,” says Görgen Johansson, Senior Vice President and Head of Business Area Dynamics.

The AUV62 is an advanced and highly modern Autonomous Underwater Vehicle available in several different configurations and already selected by a number of customers.

Equipped with an Acoustic payload it is an advanced and capable system for cost-efficient training of a navy’s ASW forces. The AUV62 is an artificial acoustic target that mimics a submarine in a way that is compatible with any torpedo- and sonar system on the market today. The AUV62 system fully replaces the use of a submarine in the role as a maneuvering training target.

Equipped with a Synthetic Aperture Sonar (SAS) payload it is an efficient system for Mine Search, Reconnaissance and Seabed Mapping. With the AUV62 Saab offers a state-of-the-art Autonomous Underwater System for demanding customers investing in the future.

The industry’s nature is such that depending on circumstances concerning the product and customer, information regarding the customer will not be announced.