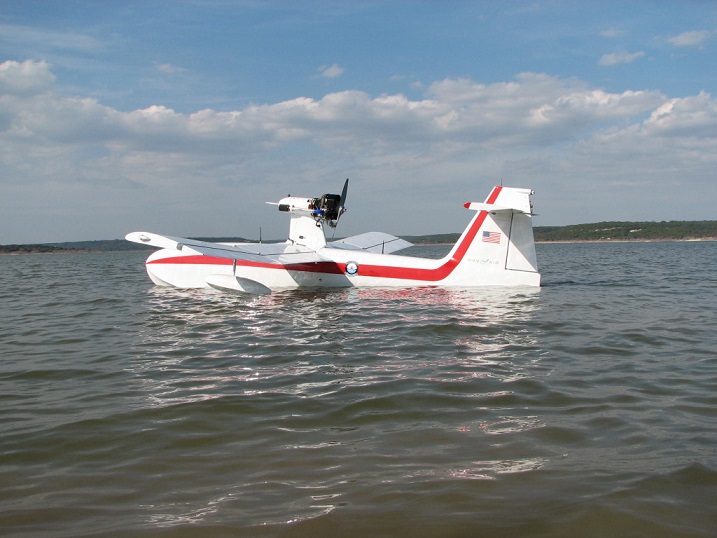 “Our research indicates this is the first time a seaplane has ever been auto- landed in the United States,” said Josh Pruzek, program manager for the Sea Scout. An on-board LADAR provided altitude and water surface data to the autopilot during the landing approach and touchdown. “Both landings were picture perfect – as good as they get,” said Pruzek.

The Sea Scout air vehicle, under development for nearly two years, is the result of a Naval Air Systems Command (NAVAIR) sponsored Phase III Small Business Innovative Research (SBIR) contract. The aircraft was flown at a gross weight of 300 lbs and carried 25 pounds of ballast in order to simulate a payload. A 38 HP Wankel engine powers the 10-foot span air vehicle.

Geneva Aerospace, of Carrollton, Texas, is OIW’s technology partner in the development of the air vehicle. Geneva supplied their flightTEK(R) avionics and VACS(TM) guidance and control software necessary to fly the plane. Geneva leveraged their core auto landing technology developed under a separate NAVAIR SBIR program which has been demonstrated in land-based tests earlier this year.

OIW believes seaplanes have a viable position in the modern Navy and are developing the craft for EO/ISR and communications relay missions. “With so much of the earth’s surface covered in water,” remarked Pruzek, “utilizing that surface for take off and landing opens up a tremendous opportunity for unmanned aircraft that previously could not have been supported.”

While seaplane technology is not new, there has been little development work in terms of new design in the last half century. The Sea Scout is a spiral development program intended to provide the Navy with a ship-based unmanned asset that minimizes the need for complicated launch and retrieval gear such as catapults and recovery nets.