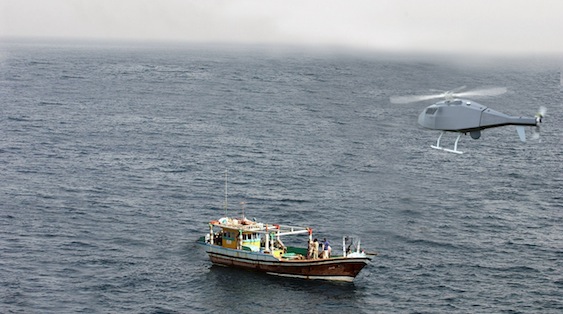 The system made its first test flights in the summer of 2014 carrying the L-3 Wescam electro-optical/infrared camera.

30 October 2014 - As part of the 2014 Euronaval exhibition, Airbus Defence and Space and DCNS signed a cooperation agreement on Tuesday 28 October 2014 in Paris to develop a ship-based helicopter UAS capability. This technological partnership will help to speed up the market release of the TANAN vertical take-off and landing (VTOL) tactical helicopter UAS, as it takes into account the naval sector’s requirements and the aircraft’s efficient integration onto all types of armed vessels from the outset.

The work the two companies are doing will enable the TANAN UAS to be integrated into the ship’s combat system. This includes the definition of its mission system and the improvement of situational assessment thanks to the data received from the various sensors on board TANAN. The work likewise encompasses the physical integration of TANAN onto the ship, including the positioning and compatibility of the antenna system, the landing deck, the harpoon and grid, the docking and securing of the UAS in the hangar, as well as the related support.

Airbus Defence and Space will produce the entire certified unmanned aerial system, the vehicle with its payloads, the datalink and the UAS control station.

DCNS will carry out the integration of the UAS on the ship and into its combat system, from the definition of the required functions and the interfaces with the combat system, to the production of corresponding UAS modules that will enable operations to be controlled via the ship’s command, to the on-board installation and implementation procedures.

Airbus Defence and Space has been developing UAS for over 30 years for a wide range of civil and military applications, from the heavier Euro Hawk HALE and the Harfang MALE to the Tracker, DVF 2000 and Copter 4 mini-UAS, all the way up to the Atlante and TANAN tactical UAS and the Zephyr high-altitude pseudo-satellite.

DCNS is currently the only prime contractor for military vessels that is now able to offer a solution that is entirely in the hands of the commander and that enables central operations to deploy surveillance or armed UAS. Thanks to major ongoing investment in research and development in this area, DCNS is continuing with the trail-blazing work it began more than ten years ago, when it first aspired to integrate tactical UAS onto its entire range of vessels, from off-shore patrol vessels to highly armed frigates.

“This agreement underscores the high level of expertise associated with our TANAN programme as well as our desire to provide the naval market with a perfectly matched system, in collaboration with our partner DCNS,” stated Jean-Marc Nasr, COO of Airbus Defence and Space SAS.

“DCNS will be the only company to offer both its current and prospective customers an integrated solution for operating a UAS that can be armed from on board a combat ship. In partnership with Airbus, DCNS offers reliable, functional and perfectly integrated solutions for naval combat platforms and systems,” said Pierre Legros, President of Surface Naval Systems at DCNS.

TANAN is a helicopter UAS with a maximum take-off weight of 350 kilogrammes, and is designed for maritime operations. Its characteristics, including extensive detection and identification capabilities, make it a considerable asset for surface vessels. It is thus suited to highly intense missions and combating asymmetrical threats alike. Flexible and versatile, with a powerful tried-and-tested diesel engine and state-of-the-art equipment, TANAN is a perfect addition to ship-based helicopters.

By integrating UAS onto combat ships, the latter’s detection range and ability to accurately identify threats can be increased, while simultaneously ensuring operational availability.