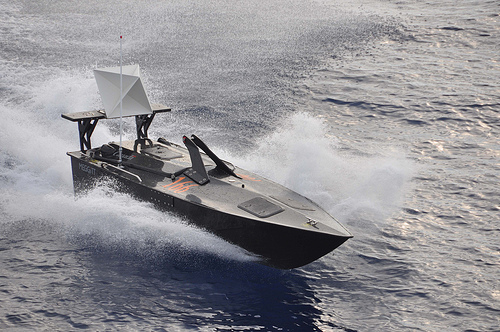 Hammerhead is an unmanned surface vehicle target (USV-T) built by Canada's Meggitt Training Systems. The composite-hulled vessel can reach speeds of 40 knots with a gasoline-powered engine. A single operator can control up to four Hammerheads using the Universal Target Control System.

In May 2010, 16 Hammerheads were operated simultaneously to simulate a fast inshore attack craft (FIAC) boat swarm. The drone is designed to be expendable and costs less than $100,000 per unit. More than 190 Hammerheads have been sold to Canada, United Kingdom, South Africa, the United States, and Germany.

Video of May 2010 Swarm-ex off Vancouver Island (CFB Esquimalt).