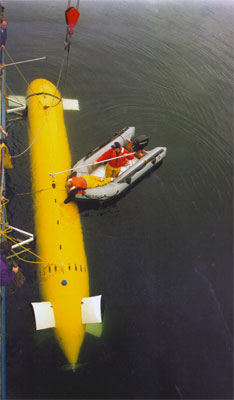 Theseus is a large autonomous underwater vehicle developed beginning in 1992 for Defence Research & Development Canada by International Submarine Engineering (ISE).  The AUV was built to support the joint Canadian-US Project Spinnaker, which was intended to lay an underwater acoustics sensor array under the Arctic Ice.  The vehicle could travel 850 kilometers at 2.5 knots at a depth of up o 2,000 meters. It has a payload of 1 ton, enabling it to carry the 175 fiber-optic cable connected to the sonar array.  In 1995 and 1996, Theseus completed successful deployments to the Arctic. The AUV laid several 220 km cables were laid in 600 m water depths under a 2.5 meter thick ice pack in 1996, establishing an AUV endurance record of over 60 hours. The vehicle is still owned by Canada's Department of National Defence and in lay-up.