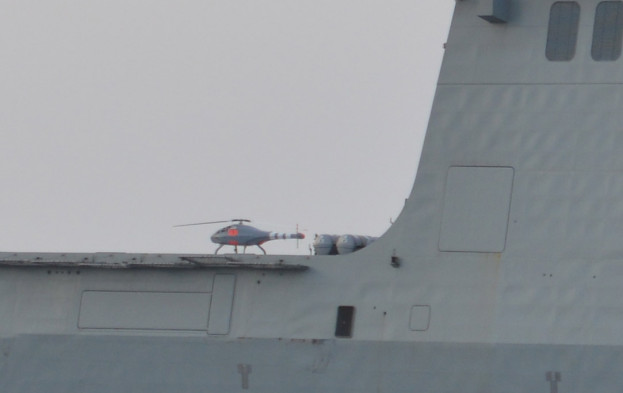 30 July 2013 - The Spanish Navy has announced that it has signed a contract with Saab to deploy the Skeldar V-200 unmanned air system for Operation Atalanta to combat piracy in the Indian Ocean.  The aircraft will be maintained and operated by Saab and embark on vessels in the  Buques de Acción Marítima (BAM).

11 July 2013 - Defense and security company Saab has signed a contract to deploy the Skeldar Unmanned Aerial System (UAS) for maritime operations. Skeldar UAS will be operationally deployed with the customer before the end of this year and will be used in naval operations where the benefits of a Vertical Take Off and Landing UAS are most prominent.

Skeldar is a flexible multi-mission system set to successfully meet
mission objectives on land or at sea. It is based on the same smart
design and innovative technological solutions that have become the trade
mark for Saab's aeronautical products and systems.

"Skeldar UAS is an excellent choice for maritime operations thanks to
its high flight performance, heavy fuel engine and easy-to-maintenance
design. We continuously improve the system with the integration of new
sensors and different payload according to customer needs," says Lennart
Sindahl, Head of Saab's business area Aeronautics.

The industry's nature is such that depending on circumstances concerning
the product and customer, information regarding the customer will not be
announced.

Saab serves the global market with world-leading products, services and
solutions ranging from military defence to civil security. Saab has
operations and employees on all continents and constantly develops
adopts and improves new technology to meet customers' changing needs.

15 May 2013 -  Defence and security company Saab has verified a number of key capabilities of its Skeldar V-200 vertical lift UAS through flight campaigns at different sites in US and Sweden demonstrating the system’s performance for both land and sea based operations. A number of successful customer demonstration flights have also been conducted.

“The Skeldar V-200 has passed yet another important milestone in the program with these key capabilities verified and demonstrated to various customers,”says Mikael Franzén, Director of Saab’s Product Area Tactical UAS.

The unmanned system’s built in safety functionality confirmed contingency behaviors in case of link loss including autonomous navigation in accordance to predefined parameters as well as auto landing and shut down.

“The combination of two alternative engine types, a modular payload design, and the ability to incorporate and utilize a variety of data link systems, provides a true multi-mission capability for the Skeldar V-200 and a flexibility that enables the customer successfully meet their mission objectives on Land or at Sea,” concludes Mikael Franzén.﻿ - Press release courtesy of Saab.

Flight trials of SKELDAR V-200 from a ship in the Baltic Sea (Youtube, courtesy of Saab)