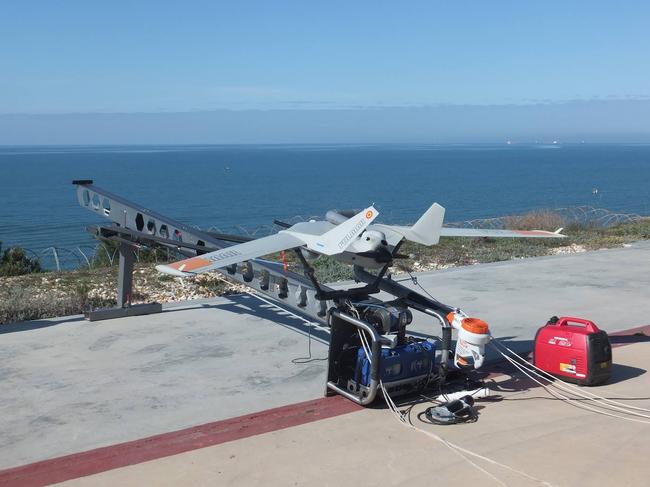 Fulmar is a marinized UAV in production by Aerovision (now Wake Engineering) and Thales Spain since 2010.

Fulmar can be launched from a vessel by a elastic-catapult and is recovered on the surface of the water by means of skids or on land with an arresting net.  Fulmar carries a 7kg payload for flights up to 8 hours endurance.  The UAV can transmit real time images and video via 2.4 ghz data-link to a note-book computer ground control station out to 50 km away.

18 April 2016 - Thales fixed-wing navalized UAS will be installed on six New Generation Patrol Craft (NGPC) being constructed by Destini Shipbuilding and Engineering for the Malaysian Maritime Enforcement Agency (MMEA). Fulmar meets the MMEA's requirement to take-off and land whilst a ship is underway.

Tan Sri Dato’ Seri Rodzali Bin Daud, Chairman of Destini Berhad, remarked that “As the MMEA seeks to upgrade its surveillance capabilities, the Fulmar provides a competitive solution which complements its state-of-the-art vessels. We are pleased to partner with Thales in further developing the expertise in coastal surveillance in Malaysia.”

Starting in 2016, Thales employees in Malaysia will provide local training and support for the Fulmar, ensuring effective knowledge transfer for operational and maintenance needs throughout the system’s life cycle.

FULMAR and the Thales Maritime Command & Control application has been demonstrated to more than 50 European Coast Guards and FRONTEX representatives during field tests and trials held for the Spanish Navy.