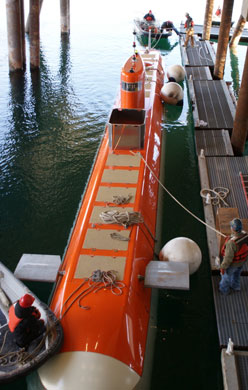 MSubs' Mobile Anti-Submarine Training Target (MASTT) is the largest known unmanned underwater vehicle, at 24 meters in length and weighing 65 tons.  The vessel can be transported in standard shipping containers and assembled at its destination.

"The Sea Services have historically organized, trained, and equipped to perform four essential functions: deterrence, sea control, power projection, and maritime security. Because access to the global commons is critical, this strategy introduces a fifth function: all domain access…All domain access is the ability to project military force in contested areas with sufficient freedom of action to operate effectively. In today’s security environment, that access is increasingly contested by state and non-state actors that can hold even our most advanced forces and weapon systems at risk with their own sophisticated anti-access/area denial strategies. " - A Cooperative Strategy for 21st Century Seapower: Forward, Engaged, Ready

Although mentioned as a new function for U.S. sea power, gaining access to all operational domains has been a goal of naval operations for a very long time. The U.S. Navy’s first ship loss as a result of enemy submarine attack came from an attempt to prevent all domain access, in this case access to the maritime battlespace of the Charleston, South Carolina harbor. On the night of February 17, 1864, the small, human-powered submarine Confederate States Ship H.L. Hunley managed to approach the U.S. sloop of war Housatonic, anchored in the Harbor, and attack her with a spar torpedo. Housatonic sank, as did H.L. Hunley by accident, and while the action had little decisive impact on either further U.S. operations in Charleston or on the outcome of the Civil War itself, it did present a new challenge to ships’ ability to operate freely at times and places of their choosing. Dangers from the undersea environment had always been one of a mariner’s greatest fears: rocks and shoals since man had gone to sea, the occasional outsized and angry marine mammal or fish, and by the 1860’s, the potential danger of naval mines. A piloted submarine ship, however, was a far different type of threat. There was little a merchant or naval ship could do to prepare to counter such a platform, and operations in any body of water where a hostile submarine could lurk would always come with some level of hesitancy and added caution.

The sinking of Housatonic began a new era of warfare. Within 50 years the submarine would have a strategic impact during the largest conflict the world had experienced, and a submarine action by the Central Powers would draw the U.S. into the War on the side of the Allies. Starting with World War I and continuing to the present, the most effective means our enemies used for denying American forces access to a maritime battlespace has been the submarine. Certainly mines and natural obstructions took their toll, from the beaches of Normandy to Inchon Harbor and the Persian Gulf, but static devices lack the maneuverability provided by an enemy submarine. Controlled by humans, they are able to react and adapt to the actions made by a counter-force, rather than simply awaiting contact. And largely because of that human element, they’re still very difficult to find, detect, and mitigate. 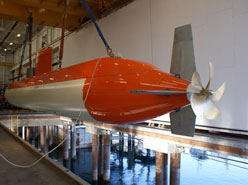 For as long as they’ve been a threat to the maritime battlespace, navies the world over have tried to find better ways to train to counter that threat. Few good choices have existed for accurately portraying an enemy submarine: actual friendly submarines have been used, as have various Unmanned Undersea Vehicles (UUVs), from simply towed, empty, decommissioned submarines to be used for target practice to small, highly-computerized devices which could be deployed to mimic enemy submarine actions and signatures. Both methods have their drawbacks, be that expense, lack of deployability, artificiality, or all three.

The Mobile Anti-Submarine Training Target, or MASTT, is the latest step in the century-and-a-half long quest to better train for Ant-Submarine Warfare (ASW) like ASW is fought. This vehicle can be operated with just a few off-board crew members, is transportable, and more realistically mimics the look and characteristics of a submarine.

Built using commercially-available technology, MASTT is an 80-foot long, 60 metric ton UUV that, as its name implies, can be transported relatively easily to wherever the Fleet needs it for ASW training. It’s been an asset of Naval Undersea Warfare Center, Division Keyport’s (NUWC Keyport) Detachment San Diego since 2012, undergoing testing and evaluation to prepare it for regular operations. The final step in that process was a Fleet Assessment, completed successfully during 12 days in September, 2015 at the Southern California Offshore Range (SCORE) near San Clemente Island.

During the entire 12 days Fleet Assessment, MASTT operators and support staff ran it for a total of 20 hours and 51 minutes, both surfaced and submerged. MASTT performed its longest submerged missions to date at 5 and 7 hours, its longest surface operation at 15 miles, and its longest tow at 30 miles. MASTT was operated by two three-person control teams working in four-hour watches from the SCORE range craft steaming near MASTT. These runs were interspersed with time for the MASTT team to evaluate progress, make adjustments to MASTT, and do preventative maintenance. "This was the first time MASTT was operated without Original Equipment Manufacturer support," said NUWC Keyport’s test director for this Fleet Assessment. "The team demonstrated the ability to independently operate, maintain, and troubleshoot the MASTT system while at-sea. They also showed they could rapidly reprogram the vehicle and change run parameters to meet customer requirements."

Maintaining Undersea Dominance in the Future

Following the conclusion of scheduled tests, MASTT and support staff returned to San Diego to analyze the Assessment, document lessons-learned, and reflect on their accomplishments.

"The MASTT Team overcame a number of challenges in a remote location with limited reachback," said the test director support for the Assessment. "It was only through their ingenuity, technical expertise, and perseverance that Keyport and MASTT were able to be as successful as they were."

Just as the Confederacy did 150 years ago, nations and non-state actors, many hostile to U.S. and allied interests, will increasingly seek the asymmetrical capability provided by submarines. With limited range and strike capability, they will now, as then, be used often to control seas in the near-shore environment, and potentially deny access and operational freedom to others. Countering this condition is one of the primary functions of U.S. sea power, and MASTT is a new and vital tool to help the United States Navy and our allies keep all areas of the maritime domain free and accessible.

Republished with permission from CRUSER NEWS.