The Northrop Grumman MQ-8B Fire Scout is a vertical take off and landing (VTOL) UAV in service in the U.S. Navy. Fire Scouts have deployed operationally in conducting ISR missions in the Persian Gulf, Afghanistan, Horn of Africa, and Caribbean. On July 10, 2012, a new Fire Scout operator training facility was opened at Naval Air Station Jacksonville. The Navy's projected Fire Scout inventory is 168 aircraft.

The Navy conducted a live-fire assessment with Fire Scout using the Advanced Precision Kill Weapons System (APKWS) in the spring of 2013.

Since 2006, the MQ-8B has flown more than 12,000 hours.  The first Fire Scout is scheduled to deploy on the Littoral Combat Ship in 2015.  Fire Scout will support the LCS' anti-surface and mine warfare mission modules, but not the anti-submarine warfare module as originally envisioned.  Additionally, the MQ-8B will no longer be aligned with the HSM helicopter squadrons, only serving in the HSC community.

12 May 2014 - An MQ-8B Fire Scout assigned to HSM-35 supports Visit, Board, Search, and Seizure training from USS Freedom (LCS-1) while operating in the Pacific Ocean off Southern California. 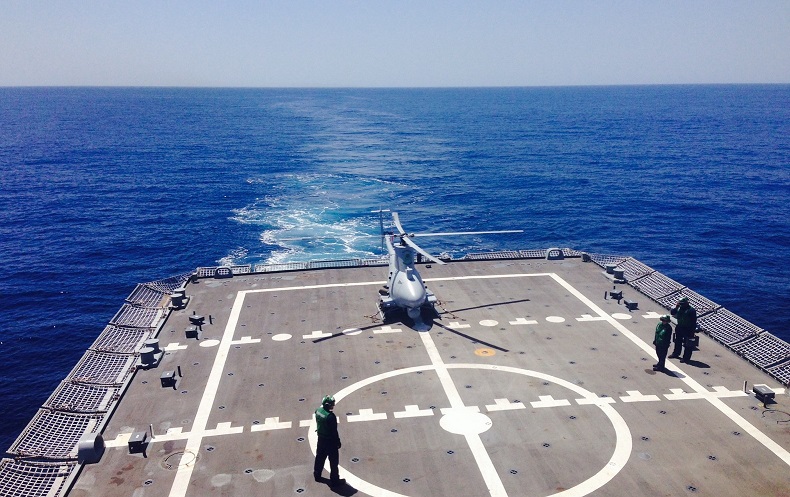 1 May 2014 - An MQ-8B Fire Scout sits on the flight deck of USS Freedom (LCS-1) April 30 off the coast of San Diego, Calif.  Sailors from Helicopter Maritime Strike Squadron 35 (HSM-35) are conducting the first combined operations between the unmanned Fire Scout and the manned H-60 helicopter aboard the littoral combat ship over the next few weeks. US Navy Photo.

HUQ-1 will serve three roles. First, it will be Navy’s Fleet Replacement Squadron to train new Air Vehicle Operators (AVOs) and Mission Payload Operators (MPOs) for the MQ-8B Fire Scout and upcoming MQ-8C. Fire Scout AVOs must be one of the following specialities: Naval Aviator or Naval Flight Officer (13xx designator), or enlisted Naval Aircrewmen (AW), and Air Traffic Controlmen (AC) who are E6 or above. Fire Scout MPOs may be enlisted personnel E5 or above in the following rates; AW, Operations Specialist (OS), or Intelligence Specialist (IS).

Second, the squadron will supply current surface combatants with 32 man UAS detachments, or UDets, led by a Lieutenant Commander Naval Aviator. The Perry Class frigate has become the Navy’s workhorse VTUAV platform, deploying with Fire Scouts most recently to the Horn of Africa, Libya, and South America for Intelligence, Surveillance, and Reconnaissance (ISR) missions in support of conventional and special operations forces. To date, many of the positions on these frigates have been filled by activated Navy Reservists, so HUQ-1 will provide a more permanent manning solution.