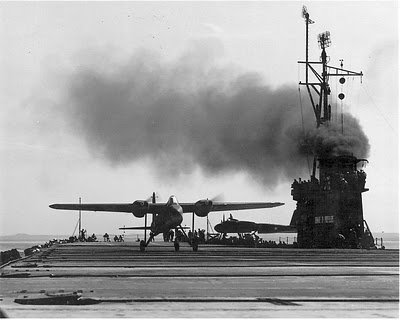 1943 - A Naval Aircraft Factory TDN-1 assault drone taxies on the deck of the Great Lakes paddlewheel training carrier USS SABLE, with another aircraft of the same type in the background parked by the carrier's island. (Official U.S. Navy Photograph)

The TDN-1 was a remote-controlled assault drone developed by the U.S. Navy in 1942 designed to operate from carriers and launch either one two thousand pound bomb or an aerial torpedo.  The TDN-1 could be controlled from the ground or air by a following TBM Avenger or PB4Y. One Avenger could direct multiple drones from as far as eight miles away using an RCA television camera in the drone's nose.

TDN-1's were successfully launched off the training aircraft carrier USS Sable (IX-81) on the Great Lakes. On October 31st of that year, several flight tests occurred with TBMs controlling multiple TDNs simultaneously. One hundred production aircraft were ordered in 1942, but the TDN-1 never saw operational service.