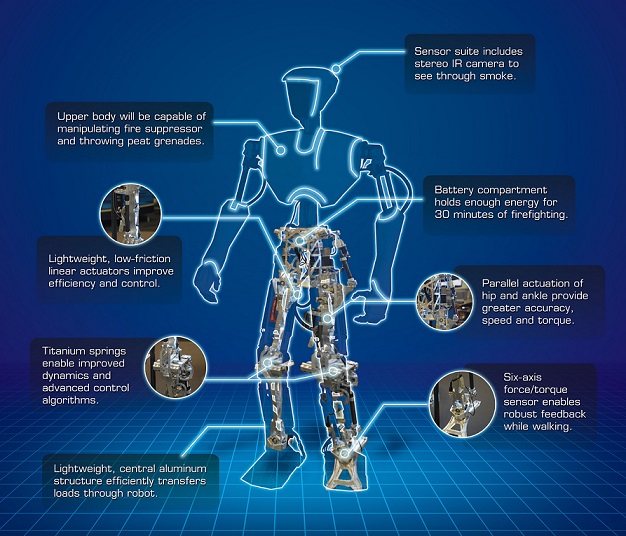 Engineers from the Navy Research Laboratory's  Laboratory for Autonomous Systems Research supported by Virginia Tech and University of Pennsylvania are developing the Shipboard Autonomous Firefighting Robot (SAFFiR).  The objective of SAFFir is to create an autonomous systems for fire safety and damage control. Sensors to help it detect fires and see through smoke include a gas sensor, LIDAR, and stereo infrared (IR) and ultraviolet (UV) cameras.  The prototype is a bipedal humanoid robot with 24 degrees of freedom movement which can manipulate fire nozzles. SAFFir is derived from DARPA's THOR: Tactical Hazardous Operations Robot.

According to John Farley, Director of the NRL's decommissioned damage control test ship ex-USS Shadwell (LSD-15), "the robot could be trained and constantly updated" to make sure it wouldn't make mistakes that a human not up to the most current training standards might make.

The tests onboard Shadwell were designed to demonstrate how the robot could negotiate the uneven and confined conditions of the test ship in order to autonomously operate water hoses to suppress a fire.  During the test, the teleoperated robot wore human raingear to protect its electro-mechanical systems from water, steam, and particulates.

Also tested on Shadwell were "microflyers" or multi-rotor unmanned air vehicles designed to fly through smoky hallways to pinpoint fires.