The Knifefish is a heavyweight (1,700 pound) UUV derived from the Bluefin Robotics' Bluefin-21 built under subcontract from General Dynamics. In July 2012, the Navy announced that Bluefin Robotics had completed a preliminary design review for the Surface Mine Countermeasure Unmanned Underwater Vehicle (SMCM UUV), a component of the Littoral Combat Ship's (LCS) Increment 3 Mine Warfare mission package.  A critical design review was completed in January 2013.  The Navy is planning to acquire a total of 48 Knifefish vehicles, two for each mission package.

The deepwater-capable system will identify mines in high-clutter underwater environments while reducing risks to the ship's crew. The vehicle carries a low-frequency broadband synthetic aperature sonar. Data from the UUV will be downloaded from the Removable Data Storage Module (RDSM) for shipboard analysis. Knifefish is expected to begin operational testing in 2015 and reach initial operating capability in 2017.

The Bluefin-21 had previously been part of the U.S. Navy's Battlespace Preparation Autonomous Underwater Vehicle (BPAUV), designed for shallow water MCM missions off the LCS.  The Office of Naval Research (ONR) conducted a demonstration with BPAUV in June 2003 aboard the USS Falcon (MHC 59) in the Corpus Christi Operating Area. A BPAUV operating from HSV-2 Swift was lost in the North Atlantic and later recovered on a beach in Norway.  In 2010, ONR donated a BPUAV to Florida Tech's Ocean Engineering Department.

The Navy's initial Bluefin-21 is also known as the Artemis and was deployed to the Indian Ocean in April 2014 to search for the Malaysian Airlines Boeing 777 wreckage.

Bluefin has also noted that they are working on adding manipulators to the Bluefin-21 to allow the same vehicle to detect, classify, identify, and engage underwater objects.

16 April 2014 - The U.S. Navy's Bluefin 21 autonomous underwater vehicle "Artemis" continues to search for wreckage from Malaysian Air Flight 370 Boeing 777 in the Southern Indian Ocean West of Australia.  The AUV's first mission on 13 April was cut short when it exceeded its depth limit of 4.5 km and automatically returned to the surface.  The Artemis is deployed aboard the Australian Navy Australian Defense Vessel (ADV) Ocean Shield as part of Joint Task Force 658.  Each mission may take a full day, with two hours to dive to the search zone near the bottom, 16 hours of searching with a side scan sonar, two hours to return to the surface, and four hours to upload the data. 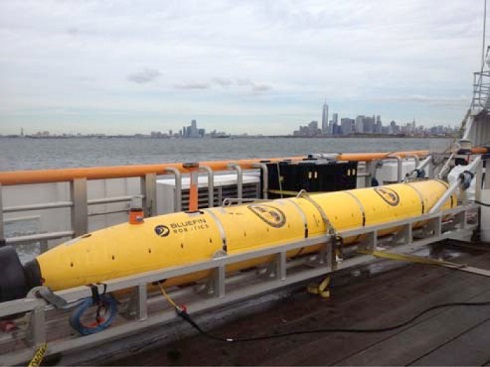 Navigating from the waters of Boston Harbor, the 20 foot long, 1,350 pound, 'heavyweight' AUV traveled south past Cape Cod, headed west through Nantucket Sound between Martha's Vineyard and the mainland, and then continued south of Long Island to the approaches to New York City. The fully autonomous endurance mission was designed to push the boundaries of traditional AUVs with the objective to uncover the challenges and requirements for significantly extending AUV endurance for new applications.

To optimize for endurance and range, the vehicle traveled at a depth of 10 meters and an average speed of 2.5 knots through busy waterways and strong currents. The vehicle surfaced at 20-kilometer intervals to report position via Iridium satellite and made Upper New York Bay with a 10 percent energy reserve crediting a new high capacity energy section.

Navigating from the waters of Boston Harbor, the 20 foot long, nearly 1,200 pound, 'heavyweight' AUV traveled south past Cape Cod, headed west through Nantucket Sound between Martha's Vineyard and the mainland, and then continued south of Long Island to the approaches to New York City.

This exercise is the first of several planned missions that will incrementally increase autonomy complexity and endurance over the life of NRL's research program and in overall AUV-based technology for the Navy.

Houston and his team are developing AUV based technologies that include extension of the Knifefish technology (as part of the Office of Naval Research Future Naval Capabilities program), increasing ranges for mine countermeasure (MCM) operations, and advancing autonomy for AUVs. Houston's team is also applying this new technology to shallow water Anti-Submarine Warfare (ASW). This more recent development provides the Navy with the technical foundation for high performance detection and classification of difficult ASW targets using active sonar on AUVs in challenging environments.

The purpose of the system is to address the Navy's need to reliably detect and identify undersea volume and bottom mines in high-clutter environments with low false alarm rates. The Knifefish system is a part of the Littoral Combat Ship (LCS) mine countermeasure (MCM) mission package targeted to reduce risks to personnel by operating in potential minefield regions as an off-board sensor, allowing host ships to remain at safe distances outside minefield boundaries.

7 August 2013 - The US Navy's Knifefish surface mine countermeasure unmanned undersea vehicle (UUV) program has achieved a new milestone with the completion of a comprehensive risk reduction program.

During the configuration item test (CIT), the UUV's key components including the hardware architecture and critical areas of hardware and software integration have been verified.

"Overcoming the unique size, weight and power challenges are keystones to the successful deployment of the navy's Knifefish program," Mason said.

"The Knifefish will help meet the constantly-evolving requirements of today's fleet and greatly reduce risk to navy personnel and ships."

Scheduled to enter service in 2017, the system will form a critical part of the US Navy's littoral combat ship (LCS) mine warfare mission package and offer enhanced mine-hunting capabilities for fleet mine warfare commander and sailors.

Quincy, MA, USA—24 January 2013—Bluefin Robotics, a leading provider of Unmanned Underwater Vehicles (UUVs), announced that they will produce a variation of the Knifefish UUV for the Naval Research Laboratory (NRL). Knifefish is a specialized Bluefin-21 UUV that is being developed for the Surface Mine Countermeasure Unmanned Underwater Vehicle (SMCM UUV) program for which Bluefin is under subcontract to General Dynamics Advanced Information Systems. Bluefin completed the Knifefish Preliminary Design Review earlier this year and will leverage that design to deliver a system to NRL. The vehicle will be used to advance NRL’s low-frequency broadband (LFBB) payload technology and support their broader mission to advance basic and applied research in undersea warfare.

“We are pleased that we are able to easily adapt the Knifefish design for NRL’s specific needs,” said David P. Kelly, President and CEO of Bluefin Robotics. “This is just another example of how the UUV technology is maturing into a reliable, robust platform option for advancing new science and capability.”

Bluefin’s technology has proven suitable for specialized acoustic payloads like NRL’s LFBB sonar. For the past ten years, the two groups have been working closely together on developing and fielding the Reliant vehicle, a Bluefin-21 used as a science and technology system for the original LFBB development.

“Science and defense programs are now mutually benefitting from the investments made in the UUV technology. Bluefin has been a key contributor to that effort with the Reliant vehicle, their commercial systems, Knifefish, and now with our new UUV,” said Dr. Brian Houston, acting head of NRL’s Physical Acoustics Branch. “The science made possible with this vehicle will advance the nation’s mine-hunting capabilities that can be incorporated into future generations of UUVs.”

In addition to many of the Knifefish features, NRL’s new vehicle will be equipped with two-way iridium communications, specialized sensors, and empty sections that will accommodate their acoustic payload, including a towed receiver array, and a reacquisition capability. Bluefin will also deliver topside support equipment and graphical-user interface software tools.