The Wave Glider is an Unmanned Surface Vehicle manufactured by Liquid Robotics which uses wave energy for propulsion. The Wave Glider can autonomously collect and transmit data for extremely long duration missions. In 2012, the Naval Postgraduate School acquired two Wave Gliders for research and experimentation. RADM (ret.) Jerry Ellis discusses the project in this video (starts at 19:28). Wave Gliders have also been used for oceanographic research by NOAA. 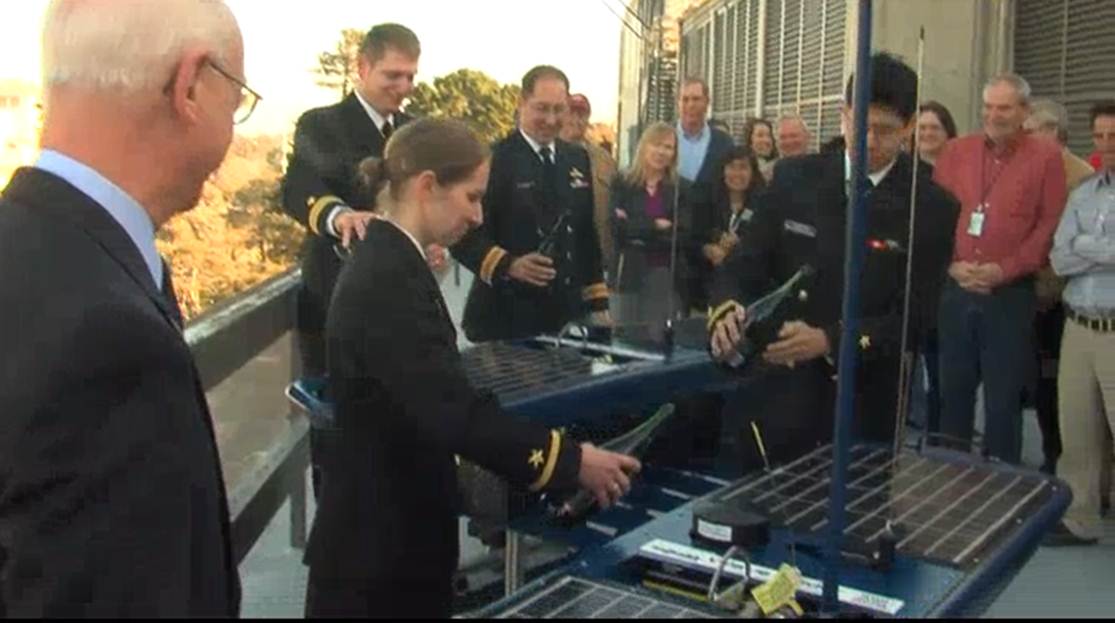 "Over several years, we’ve worked closely with Liquid Robotics on multiple applications with their innovative technology, the Wave Glider. We've used the Wave Glider to demonstrate advances in hurricane forecasting, measure CO2 levels, monitor the Arctic marine environment, detect tsunamis and collect fisheries data,” said Craig McLean, NOAA’s deputy assistant administrator of the Office of Oceanic and Atmospheric Research. “I am pleased to establish this agreement to strengthen our important partnership and to improve environmental observations.”

• Improve unmanned platform operational capabilities or geographic scope of coverage to collect data in areas or in conditions too difficult or risky for manned observations.

More specifically, the CRADA will involve collaboration for:

Additionally, there will be research expeditions to augment weather satellite data collection records by providing high resolution, surface (in-situ) data over long duration time periods (up to a year) and vast ocean expanses never before affordable or feasible to collect.

“We are excited to be working closely together with NOAA to advance ocean observations with long duration autonomous systems,” said Bill Vass, CEO of Liquid Robotics. ”We believe our Wave Glider technology provides a cost efficient way to gather scientific and environmental data to address the many challenges ahead.”

“Countries around the globe are losing valuable natural resources and economic opportunity without the ability to persistently patrol their coastlines, MPAs and EEZs,” said Bill Vass, CEO of Liquid Robotics. “This strategic partnership will bring to market a powerful solution with the ability to help close this gap globally.”

The Sentinel Passive Acoustic Sensor, designed and manufactured by Ultra Electronics USSI, will be scalable and configurable to meet the end user’s operational requirements covering a broad range of mission applications. The sensor/software suite is designed to acoustically detect, track and form contact reports on waterborne targets that are transmitted to a command and control node on shore, ship or aircraft platform. Contact reports will contain spatial information that allows for data fusion with other sensor sources to achieve an affordable common operational picture that will provide the user maximum situational awareness. Applications for this product are vast and include area surveillance, perimeter trip wire notification, marine mammal monitoring and data collection, environmental data collection and defense and military mission capability sets.

8 April 2013 - Liquid Robotics today announced the introduction of the Wave Glider® SV3, the world’s first hybrid wave and solar propelled unmanned ocean robot. The Wave Glider SV3 incorporates the latest advancements in energy harvesting technology providing the ability to utilize both wave and solar energy for forward propulsion. These innovative propulsion and energy systems will help customers explore portions of the world’s oceans in conditions that previously were too challenging or costly to operate. Customers will now have the ability to conduct missions, 24x7, through all weather conditions, across most of the planet to help solve some of the world’s critical problems such as global climate change, ocean acidification, fisheries management, hurricane prediction, tsunami warning and exploration for valuable natural resources. The end-to-end ocean data solution provided by Liquid Robotics’ new integrated platform provides ocean data collection and processing at the point of collection with real time delivery of critical information to shore. The Wave Glider SV3 can tap into the inexhaustible supply of the planet’s wave and solar energy, travel tens of thousands of miles, collect data in the most demanding sea states/conditions (doldrums, high currents, hurricanes/cyclones) and deliver this data in real-time to users around the globe. This capability provides access to new levels of ocean data, more pervasively and more cost effectively than from existing alternatives.

“The SV3 is a tremendous step forward in terms of what we can accomplish in the ocean and gives customers a competitive advantage to capture data in the most challenging ocean conditions,” said Bill Vass, CEO, Liquid Robotics. “By providing the ability to deploy Wave Gliders across most of the planet and deliver ocean data in a new and cost-effective way, we’re enabling broad access to affordable ocean exploration.”

The Wave Glider SV3 leverages the basic design principle of the highly successful Wave Glider SV2 platform, which was introduced in 2009, and has since traveled more than 300,000 nautical miles globally, set a world record for longest distance traveled by an autonomous vehicle (land or sea), and has been deployed on hundreds of customer missions ranging from the Arctic to Australia, and from the Canary Islands to Loch Ness.

“The SV3 enables unparalleled, pervasive collection of data and processing of data,” said Roger Hine, CTO and inventor of the Wave Glider. “Riding the advancements in consumer electronics, smart phone, tablet computing and a new generation of extremely capable processors, we are now able to provide processing onboard - actually as powerful as a supercomputer from not long ago. With that computational power and the ability to tirelessly swim across vast oceans, the Wave Glider SV3 represents a big step forward in the state-of-the-art of unmanned monitoring and exploration.” - Liquid Robotics

The SHARC is the militarized version of Liquid Robotics’ Wave Glider system developed in conjunction with Boeing.