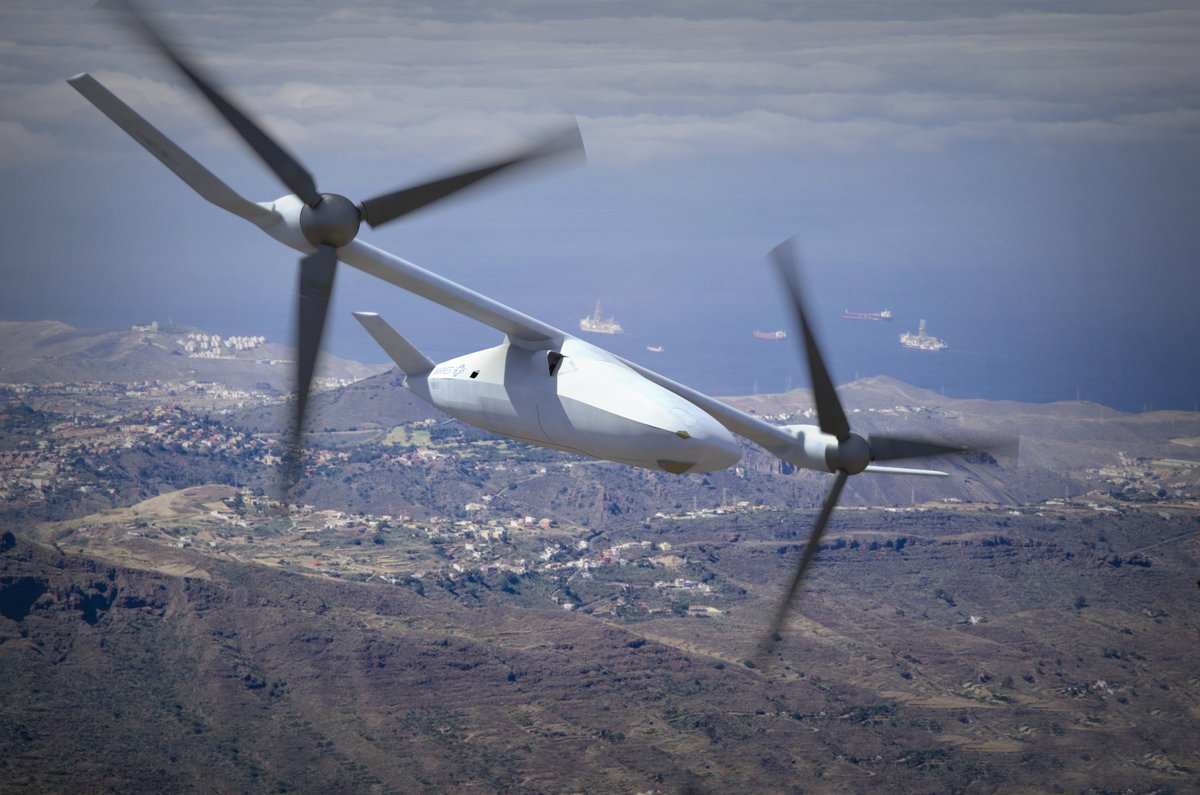 The V-247 Vigilant is a proposed armed unmanned tiltrotor designed by Bell Helicopter Textron for the United States Marine Corps. The number 247 references the availability - 24 hours/7 days a week - of the single engine, sea-based Group 5 unmanned aerial system. The aircraft would feature a V-tail, similar to the manned V-280 Valor. The aircraft was officially unveiled at the National Press Club in Washington, DC on September 22, 2016.

Group 5 refers to aircraft such as the MQ-9 Reaper or MQ-4C Triton with a maximum take-off weight over 1,320 pounds and an operating altitude of over 18,000 feet. The Marine Corps requirement for a Group 5 UAS was outlined in the Marine Aviation Plan 2016, as the MUX, which stands for “Marine Air Ground Task Force (MAGTF) Unmanned eXpeditionary ” The MUX would be a “a multi-sensor, electronic warfare” aircraft with “strike capability at ranges complementary to MV-22 and F-35.”

The V-247's rotors and wings will fold, enabling it to be stored in the hangar of an Arleigh Burke class destroyer or other vessels and up to two aircraft will fit inside of a C-17 transport plane. A model of the Vigilant shows a recessed weapons bay carrying two Hellfire air-to-ground missiles and a Sidewinder air-to-air missile.

Bell previously developed the Eagle Eye unmanned tiltrotor, which was abandoned as a Coast Guard program in 2007.

The Bell V-247 tiltrotor is an unmanned aerial system (UAS) that will combine the vertical lift capability of a helicopter with the speed and range of a conventional fixed-wing aircraft.  The revolutionary UAS is designed to provide unmatched long-endurance persistent expeditionary and surveillance capability and lethal reach, as well as runway independence to operate successfully in maritime environments and locations without secure runway availability. 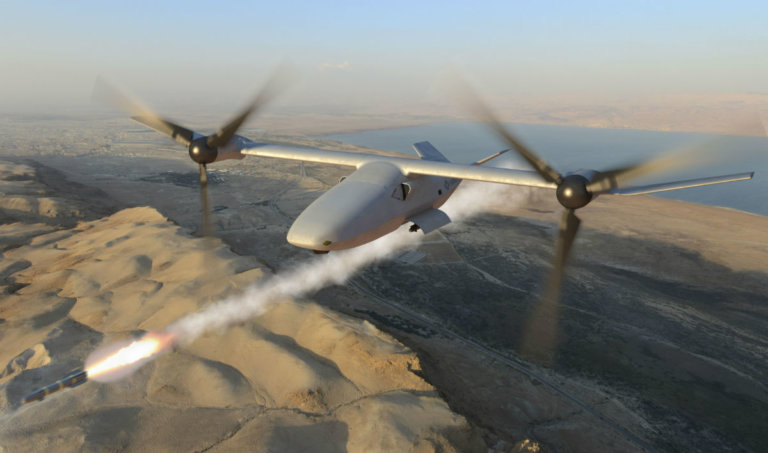 The Bell V-247 Vigilant satisfies the comprehensive spectrum of capabilities outlined in the 2016 Marine Corps Aviation Plan, and could be available for production as early as 2023. The Bell V-247 Vigilant is a solution designed to address the evolving demands of the military and transportation sectors for unmanned aircraft for a shipborne UAS platform, including:

A Group 5 UAS, the Bell V-247 Vigilant is designed to combine unparalleled capability with unprecedented flexibility to execute a wide array of mission sets, including electronic warfare, ISR (Intelligence, Surveillance and Reconnaissance), escort, C4 (Command, Control, Communications, and Computers), persistent fire missions and tactical distribution. The UAS is expected to accomplish all of this with the benefits of extended endurance through plug-and-play mission packages.

“The Bell V-247 Vigilant is the next leap in innovation making the future of aviation a reality today – it’s a testament to the power and versatility of tiltrotor flight,” said Mitch Snyder, president and CEO at Bell Helicopter. “At Bell Helicopter, we are constantly challenging the traditional notion of what it means to fly by staying on the leading edge of aviation and technological development. The unmanned tiltrotor is the latest example of how we are changing the way the world flies, taking our customers into the dynamic world of next-generation aircraft.”

The Bell V-247 Vigilant’s design boasts a number of unrivaled capabilities and transformational features, including: 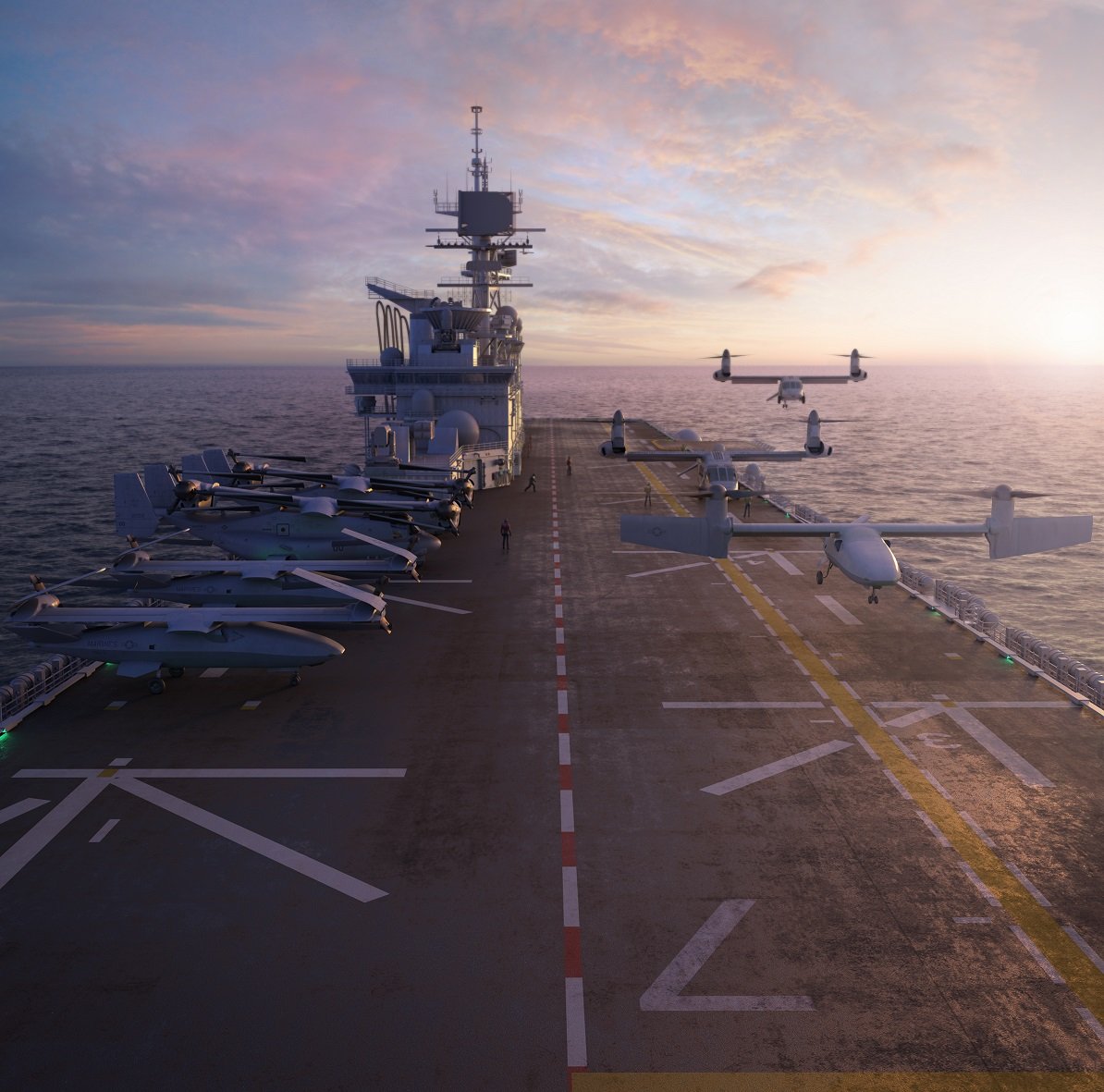 The Bell V-247 Vigilant offers a dynamic profile that is uniquely suited to complete highly versatile operations and support missions. It is designed to provide extended range flying from land or ship, matchless expeditionary capabilities and to remain on-station with heightened loiter times for extended periods. With its signature blade fold wing stow design, it will fit inside a DDG hangar space, and two can be loaded on a C-17 aircraft. The open architecture of the modular payload system enhances flexibility for aircraft customization by mission type. The bays on the Bell V-247 Vigilant are designed to carry high definition sensors, fuel, sonar buoys, light detection and ranging (LiDAR) modules, 360-degree surface radar modules, an MK-50 torpedo or Hellfire or JAGM missiles optimally. Regardless of the need, the Bell V-247 Vigilant easily integrates into priority mission sets to complete multiple airborne requirements.

“Leveraging lessons learned from our extensive history and experience with tiltrotors, we have found the best available solution to fulfill the Marine Corps need for a Group 5 UAS,” said Vince Tobin, vice president, advanced tiltrotor systems at Bell Helicopter. “The Bell V-247 Vigilant will give military customers the capabilities needed to reduce the complexity of deployment, increase speed of employment, reduce mission times and increase response time – all critical elements to completing missions to save lives and protect our freedom.”

Bell Helicopter utilized its decades of applied tiltrotor experience to develop this next generation UAS. The Bell V-247 Vigilant design and capabilities bring to bear experience from the V-22 tiltrotor program and UH-1Y/AH-1Z programs, capturing the V-280 Valor’s unmatched design and performance standards in order to provide unparalleled competency to support shipboard compatibility.