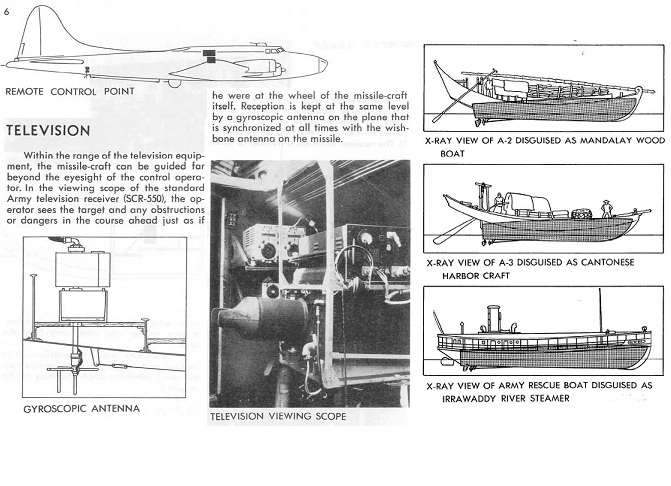 JAVAMAN (originally code-named CAMPBELL) was an Office of Strategic Services (OSS) project to develop explosive boats during World War II that could be remotely controlled from B-17 bombers and targeted against enemy-held harbors and shipping.  According to a declassified report dated September 1944, "the mission of Campbell is the sabotage of enemy targets inaccessible to other methods of attack. These targets -protected by inner and outer harbor defenses-are best approachable by operational ruse and deception."

Originally designed  as “a light, high-powered motorboat, thirty-four feet in length with a low silhouette” capable of speeds “from five to forty-five miles per hour,” the boats carried a television camera for navigation from aboard a nearby ship or airplane.  The camera was steadied on the moving boats by means of a standard Army Ordnance tank-gun stabilizer.

Three vessels were used in the program:

The TORPEX explosives were detonated remotely or upon contacting a target. The boats were camouflaged to blend in with local vessels, such as fishing boats or junks.

The AN/ ARW- 8X control system had two groups of channels, each with five controls, which could control the vessels out to 20 miles away.  After testing and improvements, the boats could be controlled out to 85 miles from B-17s flying overhead at 20,000 feet.

Conceived by the OSS in March of 1944, the Campbell program was run by Navy Reservist Lt. Cdr. John Shaheen.  The project's first testing took place shortly thereafter on 5-6 April at the Army’s Mine Command Headquarters in Little Creek, Virginia. On August 11, 1944, at 7 am a Campbell A-2 Hacker was tested in the Gulf of Mexico off Pensacola against the 5000-ton, 300-foot freighter S.S. San Pablo.  By mid-March 1945, 152 people had been assigned to the project's secret base at St Petersburg, Florida. Objections by the Navy against deploying the program in the Pacific and the war's eventual conclusion prevented the boats from ever being tested in combat.

Interestingly, in 2014, the JAVAMAN project was cited as a defense during the military tribunal of one of the terrorists accused of plotting the USS Cole Bombing.