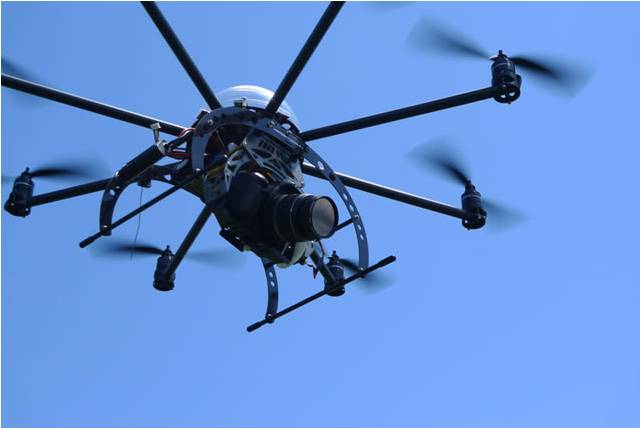 Cloak Blade is an "inherently stealthy" commercial octo-rotor UAV intended to operate at sea to provide ships with pop-up over the horizon situational awareness using first person streaming video. The UAV will investigate contacts of interest at 10-30 nautical miles range with two to four hour mission endurance and a ceiling of more than 3,000 feet. The UAV can be flown by AES-encrypted wireless or autonomous flight controls and can maneuver evasively to avoid small arms fire. The demonstration model is currently equipped with commercial off-the-shelf sensors including Hero HD and Sony 300 digital zoom video cameras providing real time full motion video. First-person video (FPV) is a common capability in hobby and DIY drones, but also used extensively in the military's small tactical UAS. The cloud will be used to support processing, exploitation, and dissemination (PED) of the Cloak Blade's data to a static IP address.

Several innovative payloads are under consideration for this aircraft. The current prototype's payload capacity of 2 kg and 35 minute endurance could be expanded in future versions by equipping the drone with a diesel generator or fuel cell. A unique feature of the micro-copter will be an embedded language translator that allows it to fly close to a vessel of interest and perform as a voice relay with the crew of that vessel. Image recognition software has also been discussed as an option which would enable the UAV to recognize specific vessels of interest. A future derivative capability envisioned by the Office of Naval Research would involve a containerized micro-copter equipped with a high altitude Magnetic Anomaly Detector launched from a P-8A Poseidon anti-submarine warfare aircraft.

Cloak Blade was developed under an FY12 Independent Research and Development program for which JHU/APL received $75,000 to acquire and test the microcopters. Three Cloak Blade aircraft with electro-optical/infrared and communications payloads are planned for testing next year in the U.S. Navy’s Trident Warrior Exercise.