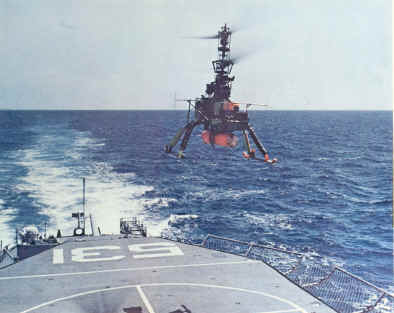 QH-50 Makes its first at sea landing in 1960. Image Courtesy of Gyrodyne Helicopters

The DASH (Drone Anti-Submarine Helicopter) was built by the Gyrodyne Company and served in the U.S. Navy from the mid-1950s in the ASW role and later as a support vehicle for weapons testing and calibration. They carried two MK-44 Homing Torpedoes for a Anti-submarine missions and had a range of about 70 nautical miles.  DASH operated off a total of 165 Navy ships and served as a spotting platform for naval gunfire during the Vietnam War.

DASH became the first unmanned helicopter to land on a ship at sea on December 7, 1960, aboard USS Hazelwood (DD-531).