The Aqua Wasp Micro Air Vehicle is a rucksack-portable UAV developed jointly by AeroVironment and the Defense Advanced Research Projects Agency (DARPA). Aqua Wasp is a marinized version of the Wasp III.

Another variant of the Wasp is designated the RQ-12A and known as the is the Wasp AE (all environment).

Wasp is hand-launched and can make a stall “dead stick” landing on the water. The UAV has an endurance of 50 minutes and can carry either an electro-optical or infrared sensor package. Wasp is operated with AeroVironment’s common ground control station also used with the RQ-20A Puma and the RQ-11B Raven. Both Wasp AE and Puma AE incorporate fully gimbaled camera systems.

Wasp has been tested by US Special Operations Command as the Proximity Outdoor Miniature Robotic Aircraft System (POMRAS) for surveillance and targeting missions.  In January 2013, the US Marine Corps placed a $12 million order for the Wasp AE (All Environment).

The United States Marine Corps, which recently unveiled its next generation small UAS family of systems, is adding RQ-12 Wasp AE as the short-range, or micro, solution to the existing small UAS portfolio made up of the AeroVironment RQ-11B Raven® and RQ-20A Puma™ AE. Puma AE is the USMC’s long-range solution.

“Together with the professionals at ADS, whose military-experienced personnel procured this order by demonstrating a clear understanding of the customer’s mission and requirements, we are confident that Wasp AE will provide deployed Marines with valuable situational awareness that will help them operate more safely and effectively,” said Roy Minson, AeroVironment senior vice president and general manager of its Unmanned Aircraft Systems business segment.

Previously procured by the Marine Corps and the U.S. Air Force, the Wasp AE weighs 2.8 pounds, operates for up to 50 minutes at a range of up to five kilometers and delivers live, streaming color and infrared video from its pan-tilt-zoom Mantis i22 AE gimbaled payload. Launched by hand and capable of landing on the ground or in fresh or salt water, the Wasp AE provides portability and flexibility for infantry, littoral or maritime reconnaissance operations. 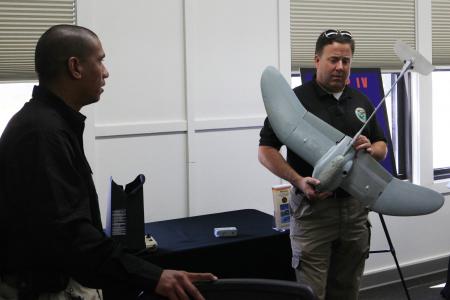