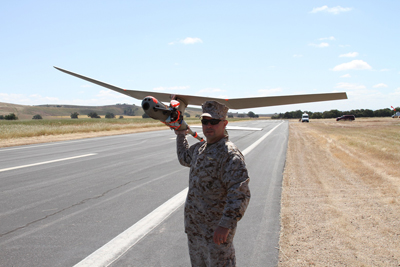 The FQM-151 Pointer was a small tactical UAS produced by AeroVironment starting in 1986. The Pointer was hand-launched and could be fitted with a fixed color or night vision camera which could relay video in real time. Pointers were deployed with the Army, Marine Corps and Naval Special Warfare. They were used operationally as late as 2003 by SEAL Team 3 by NSW operators on rivers during the beginning of Operation Iraqi Freedom.