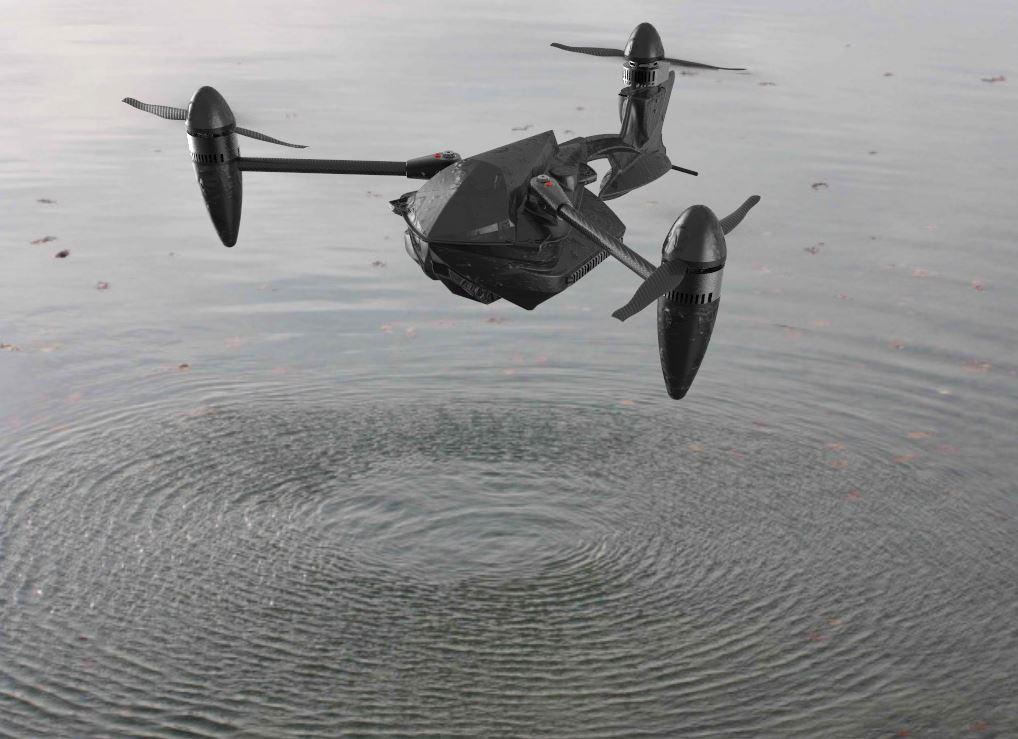 Bull-Ray is an amphibious tri-rotor unmanned air system produced by Rapid Composites. The aircraft can take-off and land from the water's surface and is designed for military and law enforcement applications.

5 May 2017 -  Rapid Composites™ is proud to present Bullray – the first rugged, fully autonomous, amphibious, waterproof, man-portable, multi-mission, VTOL that is optionally configured for less-than-lethal applications.  The aircraft can be configured as a tri, quad, hex and even as a X4-copter covering a wide spectrum of markets.

Bullray's rugged design is capable of performing in all weather conditions and does not require a transit case.  All fuselage components are made of carbon fiber and can be rapidly customized to support the most demanding Commercial, Law Enforcement and Military customer needs.

The new heavy lift version of the Bullray will be unveiled at the AUVSI-XPONENTIAL/Dallas (Booth 121) and at SOFIC/Tampa (Booth 804) during the 2017 shows featuring a FN 303® launcher system capable of incapacitating a suspect with one round and carries a total of 15.

Most of the existing VTOL UAV/UASs have many drawbacks to include; too many parts, cannot fly in the rain, or too fragile whereby requiring the need to be transported in a heavy rugged case. Rapid's team examined the existing VTOL marketplace to identify common denominators and identify voids to develop a ready-to-go, fast deployable system that would overshadow all other bulky and time consuming processes currently plaguing most other UAV/UAS Aircraft. This resulted in the development of an entirely new category of autonomous aircraft. Significant intellectual property was identified and protected, collectively capturing the Rapid's new advances in design, construction methodologies, materials and manufacturing.

"Our company recently purchased a new state-of-the-art facility with expanded molding and CNC capabilities. We work on time, on budget and within the most exacting standards of precision and performance," said Matt Dressig, Rapid's Industrial Design Manager of its UAS business segment.  "My team plans to unveil a new game changing UAV/UAS every year!"  Rapid Composites™ selected industry partners with uniquely relevant experiences such as FN Herstal, S.A., FN America, LLC,  Surefire, Steiner Optics and FLIR Systems to help form a comprehensive and powerful solution within the UAV/UAS Industry.