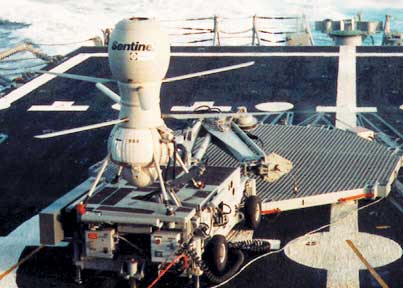 CL-227 Sentinel During at sea testing onboard a U.S. Navy guided missile frigate.

The CL 327 was a vertical take-off and landing UAV developed by Bombardier Aerospace (which acquired the original maker Canadair) and first flown in 1997.  The aircraft's coaxial rotors were driven by a 125 shaft hp Williams WTS117-5 turbo shaft engine which provided lift for a 105 kg payload for up to 6 hours.

A predecessor aircraft, the CL 227 Sentinel, was tested at sea onboard USS DOYLE (FFG-39) from October to December 1991 as part of the maritime VTOL UAV system (MAVUS) demonstration sponsored by the Pentagon's UAV joint program office.   Bad weather in the North Atlantic caused much of the testing to be canceled, but Sentinel completed seven flights totaling 8.5 hours from DOYLE.

On 10 June 1998, a CL 327 crashed after the lower fuel tank attachment lugs failed during a Navy demonstration flight over the Yuma Proving Ground in Arizona. The U.S. Navy VTOL UAV sea trials for the CL-327 Guardian and the UAV Common Automated Recovery System (UCARS) were completed during November 1999.  Due to a program delay, the intended Naval vessel was not available to host flight testing.  The U.S. Coast Guard, also interested in the Navy's VTOL UAV program, offered use of the USCGC Thetis out of Key West, Florida as an alternative.  The CL-327 was successfully launched from the flight deck of the Thetis while underway south of Key West.  After completing flight operations and collateral tests, the CL-327 was recovered, without pilot intervention, utilizing the UCARS system.  The CL-327 landed within inches of the launch point on the flight deck.  That final flight successfully met all test criteria and completed the program deliverables for the U.S. Navy program.  Upon return of the CL-327 and flight crew to home station in Lawton, Oklahoma, Bombardier management shut down the CL-327 UAV program.  The Lawton test facility was immediately closed and the CL-327 aircraft which completed the sea trials aboard Thetis was shipped to the Bombardier plant in Montreal, Canada.

Editor's Note: Thanks to Chip Gibson for contributing to this article.