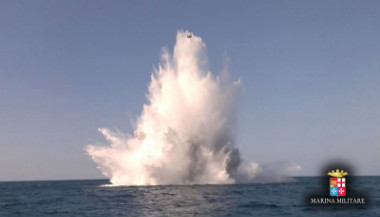 The clearance operations involved unmanned underwater vehicles (the Pluto Gigas) operating from the Gaeta class coastal mine hunter ITS Chioggia (M5560) along with the Operational Divers Group (GOS).

The first mine was neutralized from waters near Naples and an air dropped bomb was detonated near Salerno.  Another device was located near Taranto.  The operation, still ongoing, will relocate and neutralize a possible WW2 device located in the waters facing San Felice Circeo.