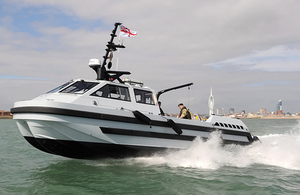 The Royal Navy's Maritime Autonomous System Trials Team (MASTT) is a team that specializes in unmanned mine hunting.  Lieutenant Commander Jack McWilliams is the current Officer in Command of MASTT.  The team uses an unmanned surface vehicle known as Hazard, which is air transportable and capable of speeds up to 30 knots.  Hazard is based on Atlas Elektronik's ARCIMs and can deploy UUVs such as the REMUS 100 and 600. 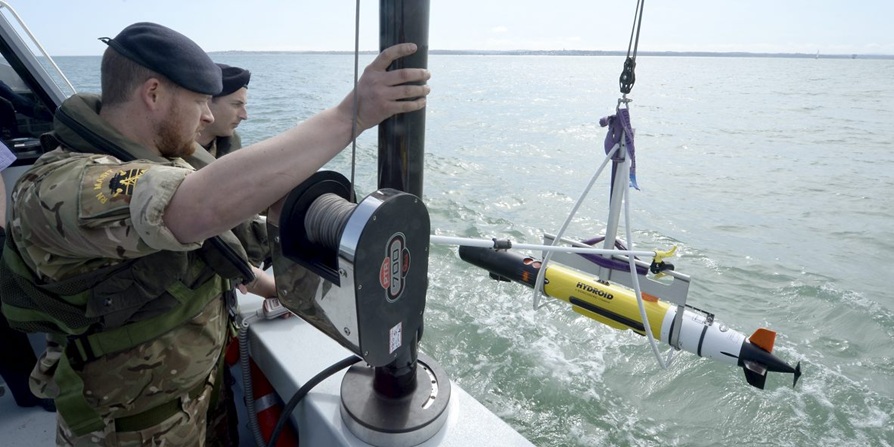 22 April 2014 - A mission off the coast of South Devon, England has surveyed two U.S. Landing Ship Tanks (LSTs) that were torpedoed and sunk during the D-Day rehearsal Exercise Tiger on April 28, 1944. Using state-of-the-art autonomous underwater vehicle (AUV) technology to collect data from the wreckage site, the mission has produced the first high-definition sonar images of this World War II tragedy. This was the first time in history that an AUV had surveyed the area.

The mission, which was executed by Hydroid, Inc., a subsidiary of Kongsberg Maritime and the leading manufacturer of AUVs, with additional data provided by the Royal Navy's Maritime Autonomous System Trials Team (MASTT), commemorates the 70th anniversary of Exercise Tiger. A tragic but largely unknown military operation, Exercise Tiger was a D-Day rehearsal for the invasion of Normandy's Utah Beach. The exercise took place off the southern English coast and resulted in the loss of nearly 1,000 American servicemen - more than the number of deaths at the actual invasion of Utah Beach.

The REMUS 100, a Hydroid AUV used for the mission, is designed to perform intricate oceanographic surveys over large areas. The vehicle is equipped with multiple sonar instruments that enable it to capture high-resolution imagery of objects on the sea floor. Using these instruments, Hydroid was able to secure close proximity, high-quality side scan and wide swath interferometric bathymetric multi-beam sonar images of the two LST wreck sites. The data show that both LSTs are about 50 meters below the surface and reach between six to eight meters above the seafloor. The REMUS 100 also discovered an object of interest close to the shore which may hold significance in relation to Exercise Tiger. An effort to identify this object is currently underway by the Royal Navy.

While Hydroid operated in the English Channel about 30 miles out to sea, MASTT focused on the waters just off Slapton Sands where the Exercise Tiger beach landing took place. The information collected by MASTT's REMUS 100 was an important supplement to the efforts of the Hydroid team. To commemorate the 70th anniversary of Exercise Tiger, Hydroid and the Royal Navy will be donating images obtained from this mission to the UK National Archive and local memorials.

"We hope that the data collected on this mission will shed additional light on this tragic event and help bring some closure to the families who lost their loved ones during Exercise Tiger," said Richard 'Bungy' Williams, Regional Manager, Hydroid Europe. "We are proud to use our technology to honor the memories of the servicemen who lost their lives in this tragic operation."

Dstl is focused upon maximising the impact of science and technology for defence and security within the UK. As part of this focus, Dstl has been working closely with the Royal Navy to ensure the delivery of state-of-the-art capabilities. At present, Dstl is working with RN MASTT, formally the Fleet Unmanned Underwater Vehicle Unit (FUUVU), to implement the tactical development of Unmanned Underwater Vehicles (UUVs), allowing them to be used for underwater force protection.

SeeByte’s SeeTrack Military software is an open-architecture platform solution enabling mission-planning, monitoring, post-processing and reporting of off-board assets such as UUVs and diver hand held system; it is now the tool of choice for sixteen of the world’s navies. SeeTrack Neptune provides a payload control architecture and real time autonomy engine for UUVs to plan and execute well known patterns of behaviour that expedite and optimise single vehicle and multi-vehicle operations. In other words the operators plan for what to do and SeeTrack Neptune decides how to do it.

Alastair Cormack, Technical Client Manager at SeeByte, commented: “We are privileged to be in a position to assist the Royal Navy with their goal of improving defence and security within the UK. With fifteen other navies currently using SeeTrack software, it is fantastic that the UK MOD will now of state-of-the-art capabilities. At present, Dstl is working with RN MASTT, formally the Fleet Unmanned Underwater Vehicle Unit (FUUVU), to implement the tactical development of Unmanned Underwater Vehicles (UUVs), allowing them to be used for underwater force protection.

Phil Brown of Dstl Naval Systems also commented: “Recent work performed for the UK MoD’s S&T Programme by SeeByte and BAE Systems, as part of the Osprey Consortia, has resulted in the development of improved autonomous planning and control systems for delivering unmanned mine countermeasures. I am very pleased to say that the latest results of this work are being exploited into the UK RN, with software being provided to the RN MASTT for testing and evaluation.”