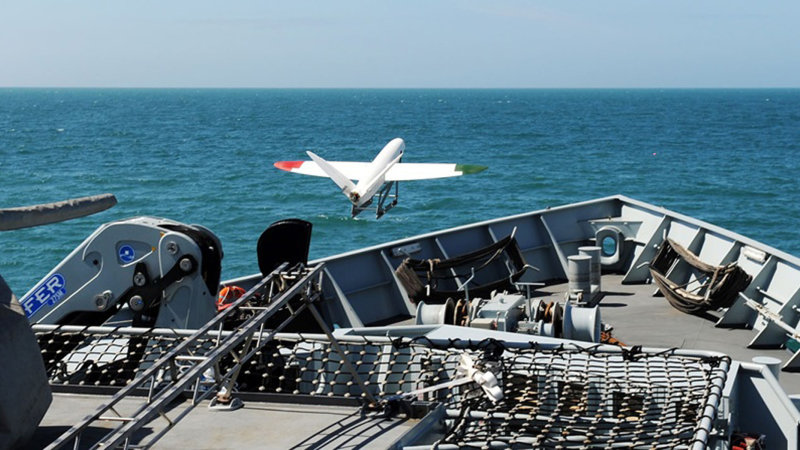 24 July 2015 - A 3D printed aircraft has successfully launched off the front of a Royal Navy warship and landed safely on a Dorset beach.

HMS Mersey provided the perfect platform for the University of Southampton to test out their SULSA unmanned aerial vehicle (UAV).

Weighing 3kg and measuring 1.5m the airframe was created on a 3D printer using laser sintered nylon and catapulted off HMS Mersey into the Wyke Regis Training Facility in Weymouth, before landing on Chesil Beach.

The flight, which covered roughly 500 metres, lasted less than five minutes but demonstrated the potential use of small lightweight UAVs, which can be easily launched at sea, in a maritime environment.

The aircraft carried a small video camera to record its flight and Southampton researchers monitored the flight from their UAV control van with its on-board video-cameras.

Known as Project Triangle the capability demonstration was led by Southampton researchers, making use of the coastal patrol and fisheries protection ship.

Professor Andy Keane, from Engineering and the Environment at the University of Southampton, says: "The key to increased use of UAVs is the simple production of low cost and rugged airframes – we believe our pioneering use of 3D printed nylon has advanced design thinking in the UAV community worldwide."

It was back in 2011 that University of Southampton engineers initially designed, and flew project SULSA, the world's first entirely "printed" aircraft.

With a wingspan of nearly 1.5 metres, the UAV being trialled has a cruise speed of 50kts (58mph) but can fly almost silently.

The aircraft is printed in four major parts and can be assembled without the use of any tools.

He said: "The Royal Navy's Maritime Capability organisation is very interested in conceptual applications of unmanned and highly automated systems.

"We were delighted to assist the University of Southampton with development of their 3-D printed unmanned air vehicle and provide a ship for an embarked launch."

Southampton alumnus, First Sea Lord Admiral Sir George Zambellas (Aeronautics, 1980) has championed the Navy's involvement with Project Triangle, which resulted in the opportunity to provide a maritime platform for the test flight.

Adm Zambellas said: "Radical advances in capability often start with small steps. The launch of a 3D-printed aircraft from HMS Mersey is a small glimpse into the innovation and forward thinking that is now embedded in our Navy's approach.

"It's well known that our first squadron of remotely piloted aircraft have proven their worth in the Gulf, providing persistent airborne surveillance across huge areas of sea.

He added that this trial helps explore how simple, automated systems have the potential to replace complex machines.

"We are after more and greater capability in this field which delivers huge value for money. And, because it's new technology, with young people behind it, we're having fun doing it," Adm Zambellas said.